The Winter Soldier has been taken by S.H.I.E.L.D. Can the Thunderbolts rescue their leader without raising alarm? Not if a certain brain-washed symbol of liberty has anything to say about it. 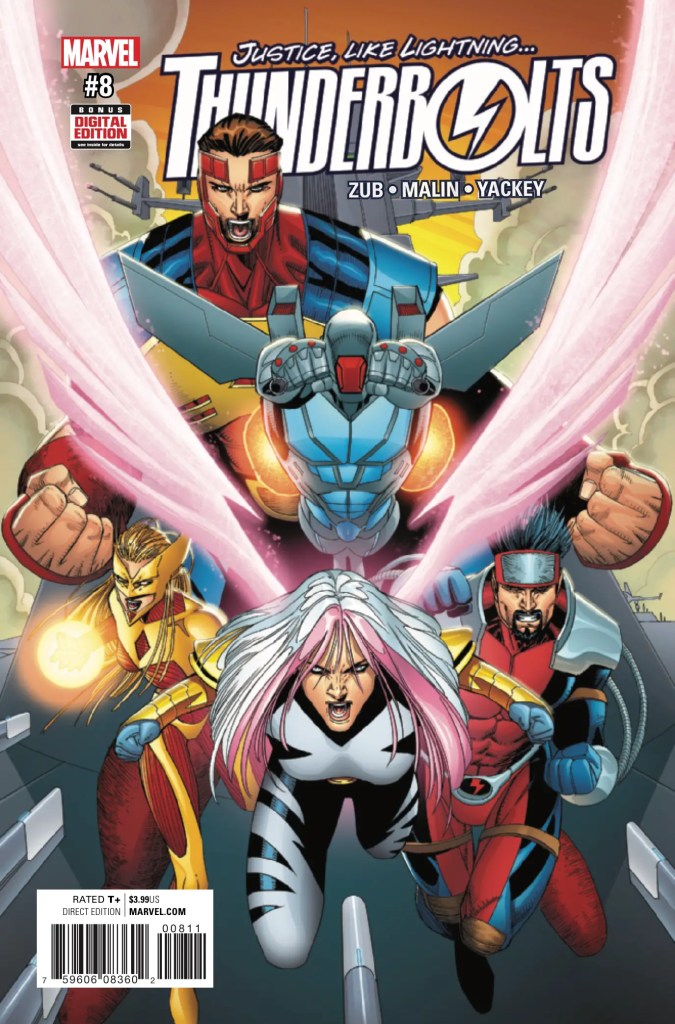 Functioning as Marvel’s answer to DCs Suicide Squad, the Thunderbolts has always been a fun book with a revolving cast of rogues trying to do good. Under the pen of Jim Zub, the T.Bolts have morphed into a bit of a hit squad for the new Man on the Wall, Bucky Barnes – AKA the Winter Soldier. When everyone’s favorite brainwashed super spy is captured by SHIELD, it’s up to the team of reformed villains to rescue the metal-armed Manchurian Candidate – unfortunately for the T.Bolts, HYDRA sleeper agent Steve Rogers is on site.

This issue sees the return to action of Thunderbolts OG Songbird, who – in addition to making the most cliche attempt at disguising her identity that doesn’t involve a fake mustache – helps her team lay waste to the unfortunate SHIELD agents monitoring this black-site prison. Songbird has long been a layered character whose villainous trade belies her desire to do good – and it’s a testament to Zub’s writing that we get a sense of this internal conflict from the character without dwelling on it.

That being said, Songbird is the most developed character in the issue. The rest fall into fairly archetypal roles. Mach X and Fixer remain somewhat undeveloped, Atlas seems mostly defined by his existing relationship with Songbird, and Moonstone is essentially a straight up psychopath. While some may think of that as a bit of a downside, it actually works quite well in an action-packed issue like this one.

Elsewhere we get a bit of intrigue with Kobik, the personification of the Cosmic Cube, as she’s seemingly being surveilled by T.Bolts alumnus Ghost. For me, this is the most interesting development in this issue – though I am a sucker for any throwdown that involves Captain America.

This issue also brings back penciller Jon Malin, and his stylized take on the characters has its strengths and its weaknesses. The aforementioned battle between Captain America, Atlas and Songbird is a stellar sequence that shows what Malin can do. Elsewhere, however, there’s the often poorly rendered faces of Maria Hill and the SHIELD agents and the bizarre, stringy hair of Moonstone.

Thunderbolts #8 moves at a decent clip and provides a decent jaunt to get us back to the status quo of Bucky leading the T.Bolts all while giving Songbird (and to a lesser degree Atlas) a chance to shine.

In this article:comic books, Jim Zub, Marvel, review
Up Next: